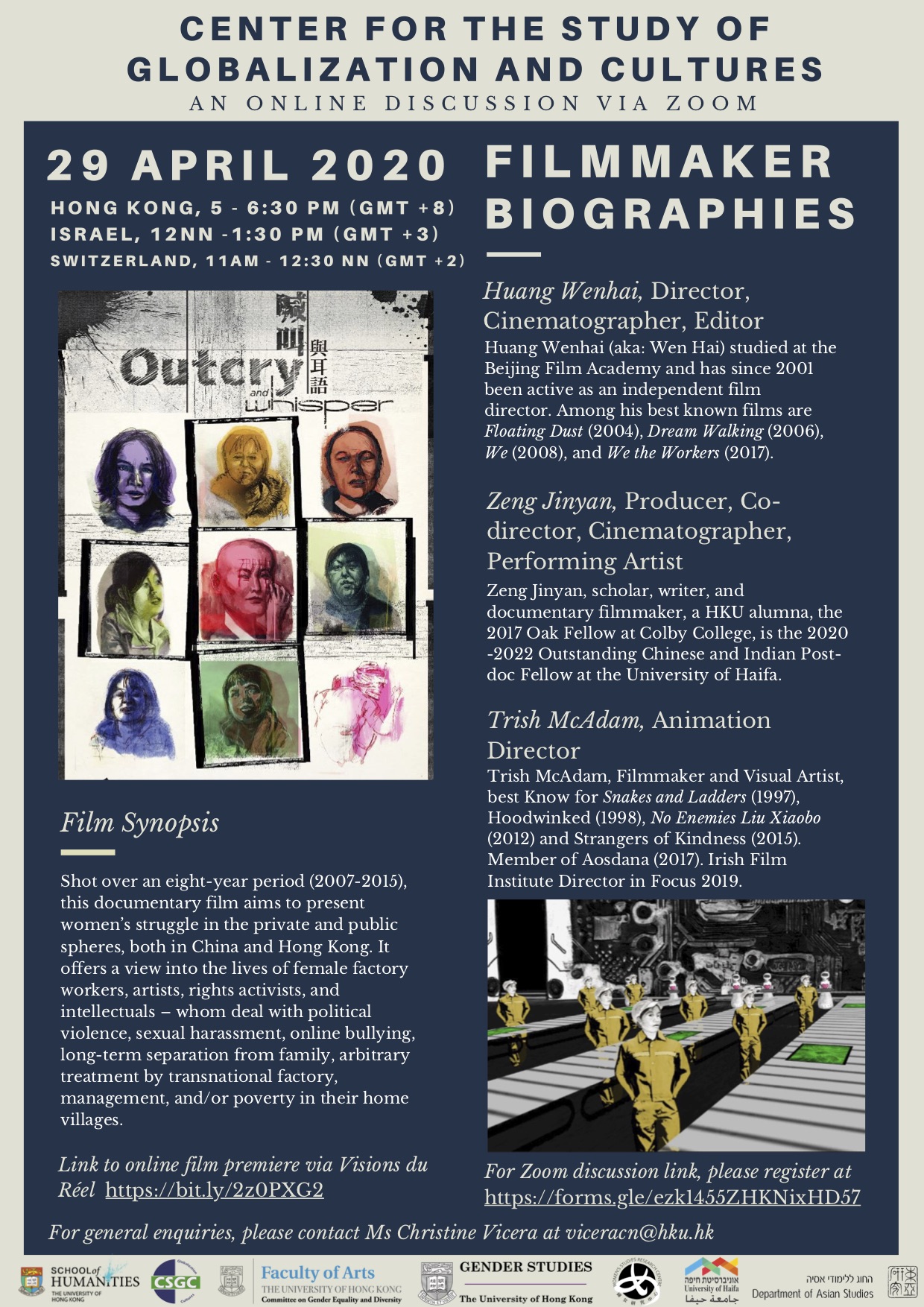 Outcry and Whisper: An Online Discussion Via Zoom

Outcry and Whisper: An Online Discussion Via Zoom

Please register at https://forms.gle/ezk1455ZHKNixHD57 for a link to the Zoom discussion.

Shot over an eight-year period (2007-2015), this documentary film aims to present women’s struggle in the private and public spheres, both in China and Hong Kong. It offers a view into the lives of female factory workers, artists, rights activists, and intellectuals – whom deal with political violence, sexual harassment, online bullying, long-term separation from family, arbitrary treatment by transnational factory, management, and/or poverty in their home villages.

Huang Wenhai, Director, Cinematographer, Editor
Huang Wenhai (aka: Wen Hai) studied at the Beijing Film Academy and has since 2001 been active as an independent film director. Among his best known films are Floating Dust (2004), Dream Walking (2006), We (2008), and We the Workers (2017).
Zeng Jinyan, Producer, Co-director, Cinematographer, Performing Artist
Zeng Jinyan, scholar, writer, and documentary filmmaker, a HKU alumna, the 2017 Oak Fellow at Colby College, is the 2020 -2022 Outstanding Chinese and Indian Post-doc Fellow at the University of Haifa.
Trish McAdam, Animation Director
Trish McAdam, Filmmaker and Visual Artist, best Know for Snakes and Ladders (1997), Hoodwinked (1998), No Enemies Liu Xiaobo (2012) and Strangers of Kindness (2015). Member of Aosdana (2017). Irish Film Institute Director in Focus 2019.

This online discussion is presented by the Center for the Study of Globalization and Cultures, Department of Comparative Literature, School of Humanities, The University of Hong Kong, with the support of the HKU Gender Studies Program, the Committee on Gender Equality and Diversity, the Women’s Studies Research Centre, the Department of Asian Studies at the University of Haifa, and the Vision du Réel International Film Festival Nyon.