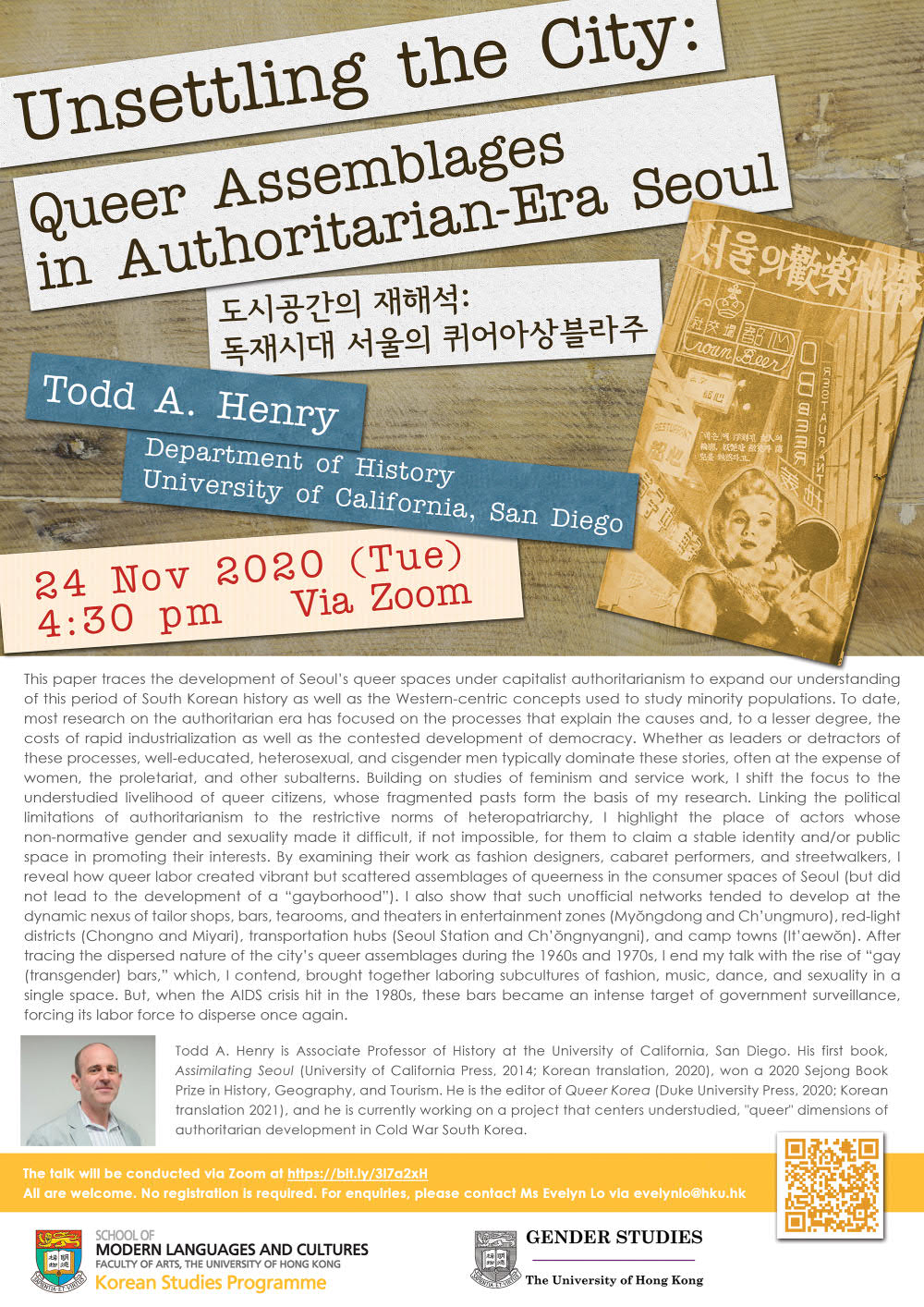 Korean Studies, School of Modern Languages and Cultures HKU has the pleasure of inviting you to the seminar:

This paper traces the development of Seoul’s queer spaces under capitalist authoritarianism to expand our understanding of this period of South Korean history as well as the Western-centric concepts used to study minority populations. To date, most research on the authoritarian era has focused on the processes that explain the causes and, to a lesser degree, the costs of rapid industrialization as well as the contested development of democracy. Whether as leaders or detractors of these processes, well-educated, heterosexual, and cisgender men typically dominate these stories, often at the expense of women, the proletariat, and other subalterns. Building on studies of feminism and service work, I shift the focus to the understudied livelihood of queer citizens, whose fragmented pasts form the basis of my research. Linking the political limitations of authoritarianism to the restrictive norms of heteropatriarchy, I highlight the place of actors whose non-normative gender and sexuality made it difficult, if not impossible, for them to claim a stable identity and/or public space in promoting their interests. By examining their work as fashion designers, cabaret performers, and streetwalkers, I reveal how queer labor created vibrant but scattered assemblages of queerness in the consumer spaces of Seoul (but did not lead to the development of a “gayborhood”). I also show that such unofficial networks tended to develop at the dynamic nexus of tailor shops, bars, tearooms, and theaters in entertainment zones (Myŏngdong and Ch’ungmuro), red-light districts (Chongno and Miyari), transportation hubs (Seoul Station and Ch’ŏngnyangni), and camp towns (It’aewŏn). After tracing the dispersed nature of the city’s queer assemblages during the 1960s and 1970s, I end my talk with the rise of “gay (transgender) bars,” which, I contend, brought together laboring subcultures of fashion, music, dance, and sexuality in a single space. But, when the AIDS crisis hit in the 1980s, these bars became an intense target of government surveillance, forcing its labor force to disperse once again.

Todd A. Henry is Associate Professor of History at the University of California, San Diego. His first book, Assimilating Seoul (University of California Press, 2014; Korean translation, 2020), won a 2020 Sejong Book Prize in History, Geography, and Tourism. He is the editor of Queer Korea (Duke University Press, 2020; Korean translation 2021), and he is currently working on a project that centers understudied, “queer” dimensions of authoritarian development in Cold War South Korea.